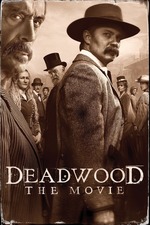 I was sobbing when this film finished. Such a lovely bit of fan service. Giving everyone a few minutes of screen-time, just enough to pay off character storylines from almost two decades ago.

But then the next day, I realised how unsatisfying it actually was. Most importantly, the Hearst storyline is left completely unresolved. In fact, it's left in a place that had been used as the inciting incident for the revenge plot from season 3.

So it's uneven fan service. Which is about as good as a Deadwood fan could have hoped for.