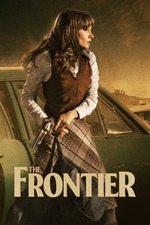 As in most crime films, money is the ultimate goal in this neo-noir from Oren Shai. The Bible tells us the love of money is the root of all evil, and the characters that populate this story have let their love corrupt their entire beings. For them, there is no other way out but cold hard cash. As a result, when things take their inevitable violent turn, only the money matters. Everything and everyone else comes second.

Everyone has secrets at a rundown motel/diner where Laine (Jocelin Donahue) who is on the run, finds herself. When she finds out the others secret involves a lot of money, she tries to get in on the action. Luanne (Kelly Lynch) runs the place and she has the look and feel of someone who dreamed big, and now those dreams sit withering away on the shelf, much like the business she runs. Gloria (Izabella Miko) tries to live up to her name with fake diamonds and a faux sophisticated husband Flynn (Jamie Harris). She's the dreamer who never left her bedroom. Who longs to leave the small town for the big city she was promised in movies. Rounding out the players are Lee (Jim Beaver) and Eddie (Liam Aiken). Lee is your typical hard case who doesn't trust anyone. Eddie could be accused of ripping off Bobby's style from Twin Peaks only you know he's never even heard of the show. The only character who remains on the outside looking in is Officer Gault (A.J. Bowen) who seems affable enough, but has a hardness to him that one catches in glimpses. A cynicism usually reserved for the big city cops.

Women on the run populate the run down, unused motel/diner we find in the middle of nowhere Arizona. One is on the run from their recent past, one from their distant past, and one from their past that never was. These are the characters who are given the most depth. We learn their back story while the men who surround them fill out the necessary character templates to make a film like this interesting. Road side diners often contain these types of characters. At least we like to think so based off films like this.

This is a film that takes all the well worn elements and breathes life into them. Not a minute is wasted. The film is either setting up the end game, building a character's motivation, or establishing the relationships between the characters. It's expertly timed and doesn't reveal anything until the precise time it needs to. The film works because you generally like most of the characters. These are down and out types you root for and who are due some luck, even if their actions aren't on the up and up. The double and triple crosses come and you watch it unfold with style as you wait to see who finally ends up with the money. The camera work is assured, the score ratchets up the tension. Nothing is given away until it needs to be. It's a film that had me thinking of Blood Simple, A Simple Plan, and Reservoir Dogs.

With movies like this, I'm often left thinking it's never worth it. Money holds that illusion of security, a cure all to all problems. However, the cost is always great and rarely worth the effort. The damage that's left leaves those who survive worse for wear. Not ever sure if they can enjoy it. Finding no rest in the security it brings.

The Damned: Don't You Wish That We Were…