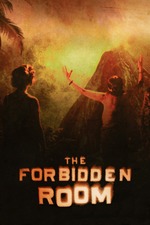 A crazy quilt of interwoven stories, dreams, asides, and bizarre segues, The Forbidden Room is a visual and narrative homage to lost films and strange, psychic searchings.

Immediately, The Forbidden Room is beautiful – a genuine work of art. A good portion of this aesthetic appeal is due to Guy Maddin’s co-director and former student, Evan Johnson. The degree of post-production work that went into this digital feature must have been daunting to take on and is just as daunting for the viewer to take in. The apparent film bubbles and morphs in an astonishing kaleidoscope of imagery that appears to be literally degrading while being projected. Various film stocks are imitated and a veritable film history flickers before our wondering eyes as the stark black and white compositions of the German Expressionist style give way to a heavily saturated color palate that recalls the 1970s, and so on. Likewise, the fervent sound design (Galen Johnson) moves us viscerally through our mesmeric journey.

If an audience member walked into the theater unaware of what was to come, the disorienting trip they embark upon might not be a much different experience than that of the viewer who knows going in that they are to witness a collection of re-imagined stories that were culled from a list of lost films. And what a wild re-imagination! After the initial introduction on How To Take A Bath (originally produced by exploitation pioneer Dwain Esper!), we go down the drain into a submarine hell of psychological space, submerged, and suffocating. Indeed, the crew aboard the submarine are running out of air and, breathless, they count down their time and suck oxygen from the air bubbles inside their flapjacks. But where is their Captain in all of this? Should they disturb him? Should they look for him? A woodsman named Cesare (after the somnambulist in The Cabinet of Dr. Caligari?) is discovered to have somehow found his way on board and proceeds to tell his story of a search of his own, for Margot, who has been captured by a wolf cult. On we meander through stories interrupted by dreams, tangents, and on and on, deeper and deeper we go, occasionally resurfacing a bit for a breath of air.

In this way we travel the surreal and silly world of Guy Maddin. But Maddin’s world is not without its psychological gravitas. His stock archetypes reprise their roles: the amnesiac and the dead father. Genuinely bewildered, the amnesiac asks, “Who am I?” This is the central question of the mystic, and of the mythic, and is a fitting theme here. In the case of lost films one can only wonder what was, what might have been, and what form they may have taken. It’s in the imagining that life is given. In another scene a young woman is manipulated by a train psychiatrist. She bares her soul to reveal her inner child. Her reaction to being confronted with her inner child is one of the more shocking moments in cinema. The dead father returns via the dream of a moustache. His young son struggles with his lonely role, and ersatz moustache, for the sake of his mother.

As we work back and forth through the stories, we work our way through the rooms of the submarine until we come to the Forbidden Room. We find the Captain in a stuporous state, suds on his face, soaking in a tub. Who is he? We’re nearly back where we started, with our search climaxing, breathing, coming up for air, re-emerging from Maddin’s inky deep.