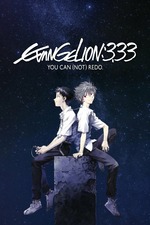 What happened? How can you go so completely off the rails in only one movie? This film bears no resemblance to the Evangelion I know and love. The characters are completely different (except for Asuka. She's still a bitch, but now there's even less of a reason for it), the plot has no connection to the original series or even to the other movies, and nothing makes sense. Seriously, I've seen NGE twice, The End of Evangelion three times, and this was my second time seeing the rebuilds and I still have no idea what the hell happened in the second half of this trainwreck. So many terrible decisions were made in the production of this movie, from the cringe-worthy dialogue to the garbage airship design to the incomprehensible character motivations. Everyone hates Shinji now for doing what they told him to do in the last movie, and no one explains anything to him (except for the scene where Fuyutski explains the one thing we already understood while they play shogi). The only redeeming qualities I can think of are that the animation is still really good, and the action scenes are still exciting.
As much as Evangelion 3.0 sucked, I still have hope. Episodes 25 and 26 of Neon Genesis Evangelion were also pretty bad, and Anno managed to turn it into something amazing with The End of Evangelion. I'm still hopeful that 4.0 will redeem this movie and save anime forever, if it ever comes out.

Evangelion: 2.0 You Can (Not) Advance