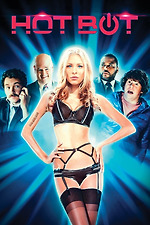 I'm kind of ashamed I watched this movie.

This movie was new on Netflix, so I checked it out. It has Donald Faison, who of course is Turk from Scrubs, so I'll watch anything he is in. Also I liked Anthony Anderson, so I thought I'll give it a shot.

It is just so bad. In the ending credits, they have outtakes, and Mr "I'm an unfunny version of Jonah Hill from Superbad" even says: "Comedy is harder than Drama". Which is true. And this movie is a perfect example. It was really bad. Also, most of the conflict didn't really make sense.

The movie is about 2 virgin teens (of course) who accidentally hit a ... robot sex-doll with their car, thinking she is a real human and take her with them. Actually, she was going to be delivered to the Senator, but she never reached him, so he wants her back. One of the boys falls in love with the robot. And for some reason the special agents who should bring the robot to the Senator are too stupid to do anything.

I really hated it. I started it some time ago and actually had to stop because I couldn't finish it. But today I thought "fuck it" and finished it. It was horrible.

It's shot pretty well and some of the effects were actually pretty good, that's why I'm rating this movie 1 out of 5 stars and not just 1/2. Don't watch it.