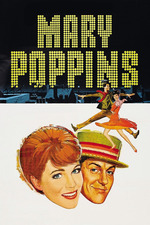 Most children’s films seem to put in at least an ounce of effort into making it somewhat relatable to the adults watching it with their children. Mary Poppins does not. This is purely and whole heartedly a film for children and it does great at being just that.

Julie Andrews was definitely the best part of the film. The songs are iconic as well, but necessarily my cup of tea. Also the practical effects stuff is pretty good and the film generally looks incredible.

Had I seen this film as a child I would have probably liked it a lot more, but for now I can simply enjoy it for what it is; a film that is fun, magical and sweet, but a film that wasn’t made for my demographic.