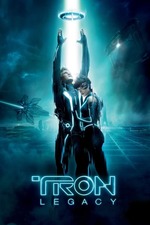 When I first saw the shaky-cam YouTube video featuring 6,500 geeks roaring their guts out with delight and surprise as the TR2N (as it was then known) trailer unexpectedly played at the end of a Disney Comic-Con panel in 2008, I actually started crying. A deep nostalgic wound opened up - I remembered bunking off school to go and see Tron at the cinema with my dad. I remembered feeling hot tears when I accidently broke my replica light cycle in the playground. I remembered lying in bed at night, pulling my Tron duvet (which I still own) up around my ears as if trying to escape into its virtual world, while it muffled the sound of my parents arguing downstairs. Tron meant something to me.

Like every other hardcore Tron fan, I bought my IMAX 3D tickets as soon as they went on sale, participated in the Flynn Lives ARG, and waited impatiently for the film to start. It was clear they were building on the original, as Sam Flynn (Garratt Hedlund) found himself sucked into the computer universe created by his now-missing father Kevin (Jeff Bridges). And when the film finally opened, we enjoyed it, and it was great to be in that world, but something didn’t feel quite right. And it took me a while, but on re-watching the film to write this review, I had to admit something to myself. Tron: Legacy just isn’t very good. And the reason is this: Joseph Kosinski has no balls.

Why do I cast aspersions on the status of Kosinski’s knackers? Well, because only someone who was two plumbs short of a man orchard would look at all the technological developments that have happened in the last 20 years into the Tron universe and say: “Nope, don’t fancy touching that.” There could have been new, more advanced games to play on the grid, as Sam escaped from formatting hard-drives onto dangerously corrupted USB sticks, searching for his father as he dodges past firewalls and cracks digital safes. But in a massive cop-out, his 2.0 world is housed on a server shut off from the rest of the world, which is fair enough – but even then, with their world running 20 years behind ours, wouldn’t that turn Flynn Jr. into A Connecticut Yankee in King Arthur's Court-style protagonist, able to create digital ‘miracles’ with his superior knowledge?

Seemingly not. Because this sack-less movie isn’t interested in taking anything more from Tron than its colour scheme. The original film was an attempt to anthropomorphise the inner world of a computer. Tron: Legacy, however, is an attempt to take OUR world and plaster it in neon glowing strips. Why are there umbrellas, and cocktail umbrellas and Boading balls? Why does it follow our physical laws, why is there blood, why do virtual planes stall when they fly too high, why is there weather? Kosinski doesn’t know.

None of which would be so bad, or even as noticeable, if the film told a good story – but Tron Legacy sprints round the grid for the first 30 minutes, and then collapses to the floor knackered for the next hour, while everyone has a nice cup of tea and a chinwag. The final act is a mess, as Kosinski gives up totally, and just starts ripping off A New Hope. Watch, slack-jawed, as The Dude pulls Jedi mind tricks, Sam gets to re-enact the turret sequence and Quorra (Olivia Wilde) pulls out a lightsaber - even after they made a joke about lightsabers earlier in the film! Shameless.

Aside from the amazing Daft Punk score, and the initially stunning visuals, this film feels like a hard drive that’s in desperate need of a defrag, with the plot shrapnel from various drafts (The fastest bike on the grid! Digital Nuremburg! Tron’s redemption! Cillian Murphy!) flying everywhere. It feels like a lazy way to re-boot the Tron franchise, but maybe I’m the problem. Maybe it’s because I spent 26 years thinking up sequels and stories, and they only spent three. Maybe it’s because I thought that Tron was mine. But honestly, I’m just sad that they didn’t have the spuds to make a good Tron film. End of line.