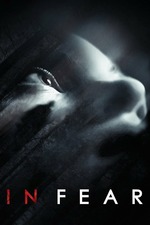 Jeremy Lovering evokes the memory of the folk-horror films like Kill List and classic 70's thrillers like Straw Dogs with his twisty debut feature. A psychological horror with a relatively simple premise that becomes so much more as the film progresses, we start with newly acquainted couple Tom (Iain De Caestecker) and Lucy (Alice Englert, much better here than in Beautiful Creatures) on their way to a music festival. But Tom has booked a hotel for the first night, so after meeting some of the peculiar locals, they make their way there. However, it soon becomes apparent that the signs leading them to the hotel are, in fact, leading them in circles. As the petrol runs out and the sun sets, tensions begin to rise. Soon they are lost in the cold, dark woods - but not necessarily alone.

Lovering and cinematographer David Katznelson use light and dark almost as characters. They are two very important aspects to the story and the characters' fear, and they are played with superbly. As in Monsters, Inc. (an unlikely comparison, perhaps, but a relevant one) it's not the dark itself that is scary, but what might be watching from it. The car tears down narrow lanes as if escaping down a narrow tunnel, with no visible end in sight.

The performances are wonderful too, particularly from Alice Englert. The use of improvisation helps to create a sense of authenticity, even if some of the dialogue is a bit clunky. Furthermore, not all of the jump scares hit the right places - it seems that Lovering is much better at slowly building a sense of dread and the results are creepingly suspenseful.

All in all, an underrated and underseen gem of a horror film with a brilliantly atmospheric score by Roly Porter and Daniel Pemberton, certain to get your heart racing as you watch characters that - crucially - you like from behind a clutched cushion.