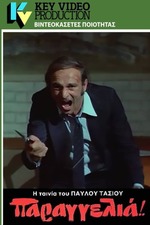 The zeibekiko is a Greek dance representing a man's pride. The steps may look random, but they signify the male dancer standing tall and keeping his balance through life's misfortunes, stretching his arms like a soaring eagle. It is extremely offensive if another man gets up and joins him on the dance floor. In a way, that man is causing him distress in his life. Instead you should sit back, encourage him by clapping him on, and enjoy the performance.

Greece. 1973. Nikos Koemtzis was just released from prison. He and his friends went to celebrate at a nightclub in Athens. The public opinion of him was already low as many knew about the robbery that put him in prison in the first place. So when he entered the nightclub that evening, the police who were already there weren't happy to see him. A very drunk Koemtzis asked his brother Demos to honor him with a zeibekiko. The drunk policemen enjoying themselves that night then decided to join Demos on the dance floor.

Parangelia is a crime drama fueled by emotions. The fault of the entire night lies on many people. Koemtzis was trying to enjoy his freedom, but everyday citizens decide they can make decisions about his life and take matters into their own hands, ruffling his feathers long before he gets to the nightclub. The film plays with perspective in uncomfortable ways. Every single character, good or bad, looks directly into the camera at the audience throughout the film. Both invitingly and judgmentally. I am still unsure of whom the director wanted the audience to give their sympathy, but one thing is for certain, all cops are bastards.

This movie is strikingly unique. I wanted to watch it immediately after it was over. It's extremely rare, having a very limited release outside of Greece. But I was able to watch it through Cinephobe.tv, a completely free internet movie channel. They are streaming super rare films for 18 hours a day under this quarantine. Check them out!