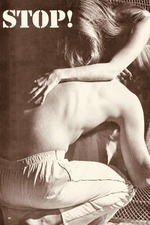 Due to numerous legal mishaps, this movie never got a legitimate release from Warner Bros. Contractual paperwork was lost during filming, some of the actors didn't receive their complete compensation, and music was used in the film that was/is still unidentifiable. On top of that, the explicit sex scenes and a homosexual rape scene lead to the film getting an x-rating. From top to bottom, this movie's existence was its demise. The directorial debut of Bill Gunn became a rare commodity for fans of the playwright.

It's so rare in fact, that you can count it's theatrical screenings on one hand:
- it's original release in 1972 for approximately seven months, but only where independent theater owners willing screened x-rated films.
- once in 1989 during a Bill Gunn retrospective at The Whitney Museum upon Gunn's death.
- finally in 2010, The Brooklyn Arts Museum unofficially screened a VHS copy of the film, for free.

The film is undeniably incredible. A couple takes a trip to Puerto Rico, where their marital dysfunction grows to animosity. It touches on marital issues in more realistic ways than most modern films. Gunn clearly had a deep understanding of relationships, and unfortunately, a very deep understanding of resentment. This is one of those examples where the writer clearly wrote from experience. One scene that will stick with me for a long time, is a fight between our married couple. The camera takes a voyeuristic birds eye view, showing us their entire bedroom from a downward perspective. In one long take, getting ready for bed soon devolves into a screaming fight of hatred and childish finger-pointing. It's an all-too-relatable moment anyone in a relationship has been in before. Every second I was telling myself I shouldn't be watching this furious exchange, that I should look away, give them their privacy. I was deathly horrified watching this argument play out. And it doesn't help with how long the scene is, as it keeps going and going and going as the emotions continue to rise. It was all because of where Gunn chose to put that camera. By showing us the bedroom, he was reminding us of all the times we ourselves fought inside our own walls. Gunn knew the perspective of the room would change how we view the scene, but at the same time, he knew the viewer would subconsciously project their perspective of relationships into this marriage. His humanistic writing in this film is more raw, heated, and vulnerable than the characters naked bodies.

I can't tell you how incredible this movie is. The unfortunate thing though is how we can't find it readily available. I was able to watch it through Cinephobe.tv, a completely free internet movie channel. They are streaming super rare films for 18 hours a day under this quarantine, I highly recommend you check them out, especially if you can catch an unseen film like this one.