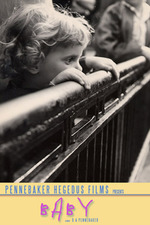 Baby is another of D.A. Pennebaker’s early works; this short film follows his young daughter at the zoo. This is the second of Pennebaker’s shorts, the first being Daybreak Express, which I thought was much more progressive.

There’s some interesting moments caught on film here, but it really just feels like a personal film to him; kind of like a home video film. That’s not an issue however, as the shots that he does capture are all very interesting and manage to compile a worthy five minutes of film. In particular, some of the shots of the child’s balloon as she runs around the zoo are relatively pleasant. The handheld shots of the public as well as the animals at the zoo are also very nice to see. The footage is all edited to some sweet music that changes as the subject progresses, though I’m not sure who the artists are.

The last section of the film is probably the best part, as it focuses on his daughter as she follows the sign to ride the carousel. This is where some of his signature shots and editing take place; Pennebaker is literally on the carousel with his daughter, and manages to compile a collection of abstract shots that focus on the inside and outside of the ride as it’s in motion.

Overall, it’s a very cute film that must have meant a lot to him, but aside from that there isn’t anything too impressive when some of his other work is taken into account. In a way, this film depicts Pennebaker getting into a frame of mind where he just goes with the flow and films everything as it comes his way; something that can certainly be seen in his more refined work such as Dont Look Back and Monterey Pop.