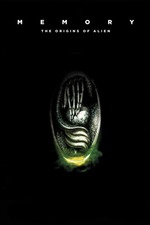 Though other science fiction films have been more influential (Metropolis), prophetic (2001: A Space Odyssey), or high-minded (Stalker), few films in the genre have proved as enduring or malleable when it comes to affording various avenues of academic study and interpretation as director Ridley Scott's Alien. The seminal work has both terrified and enraptured audiences in equal measure since it shook the world in 1979, spawning a successful film franchise that is still going today as well as countless imitators that have attempted to build on its "haunted house in outer space" premise with results both good and bad. Memory: The Origins of Alien is director Alexandre O. Phillippe's fascinating and immensely watchable making of documentary comprised of new interviews and archival footage which examines the genesis of the film and the unique artists whose unlikely collaboration made its creation possible.

The initial concept for Alien can be traced back to screenwriter Dan O'Bannon's script Memory, whose first 30 pages would essentially provide much of the action for the beginning of the film. Phillippe traces O'Bannon's lifelong fascination with science fiction to his childhood, which would eventually develop into a keen interest in comic books, literature, and mythologies of the world (especially Greek and Egyptian), all of which led him to pursue a career in filmmaking. O'Bannon would struggle to fit into the Hollywood machine, finding some success with his work on Dark Star in 1974. Shortly after his screenplay for Alien would eventually attract the attention of a major studio in 20th Century Fox. When the original director attached to helm the film, Walter Hill, would walk away from the project during pre-production, directing duties would end up in the hands of the young british filmmaker Ridley Scott. He was a master visual stylist who cut his teeth in the world of commercials but was still relatively unproven as a serious feature filmmaker, despite having an impressive debut to his credit in 1977's The Duelist. Thankfully, Scott would prove the perfect man to realize O'Bannon's screenplay, displaying a remarkable handle for staging scenes while capturing images both beautiful and haunting in ways that few could have imagined. Indeed, Alien remains, alongside his other sci-fi masterpiece in 1982's Blade Runner, to be Scott's crowning achievement as a director. Where many science fiction films previously had depicted the future and outer space as a clean, sanitized utopia the world of Alien was, in contrast, a grungy, derelict wasteland unforgiving to humanity, indebted more to film noir and German expressionism than Star Trek and Forbidden Planet. This was a world that resonated especially with working class Americans living in a post-Vietnam, post-Watergate United States in the throes of an economic recession, and Phillippe examines how Alien was both informed by and a commentary on the society that it emerged from. Much of the documentary focuses particularly on the now legendary "chestburster" sequence in which John Hurt's most unfortunate crew member falls victim to the creature in a terrifying moment of death breeding life. It's a masterfully orchestrated scene so endlessly referenced and parodied in popular culture even people who have never seen Alien are likely familiar with it. And of course, no discussion of Alien would be complete without examining the extraordinary artistic designs of H.R. Giger, whose work in creating the titular alien (or "xenomorph" for my fellow nerds) realized the monster as a Lovecraftian nightmare inspired by humanity's darkest primal fears both physical and sexual.

Somewhat noticeable by her absence in the documentary is lead actress Sigourney Weaver, whose distaff-warrior protagonist Ellen Ripley would go on to be recognized in the film and in James Cameron's more action-oriented 1986 sequel Aliens as one of the great female characters in cinema. While there's not a lot here that die hard fans of Alien are not already aware of, it's great to have so much information organized and presented here with such clarity for the film's 40th anniversary. More than simply a DVD supplement, Memory: The Origins of Alien is itself a thought-provoking commentary on how the myths of yesterday can inform the world of tomorrow.