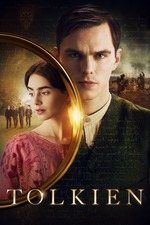 Conveying the emotional arc of an entire life is no easy task, especially one whose legacy is as towering (and in recent years with the glut of "Lord of the Rings" and "The Hobbit" media, bastardized, some may say) as J.R.R. Tolkien. Perhaps the smartest decision made by director Dome Karukoski in his literary biopic Tolkien was to focus on the early formative years of his subject, rather than the author's entire biography, managing to make a film that is taut and intelligent, even if it comes off a little heavier on schmaltz than substance in moments.

It's obvious as Tolkien unfolds Karukoski and his collaborators have the utmost respect for their subject matter, even if the Tolkien estate has not authorized or endorsed this biopic. This is important to know as those expecting a "warts and all" approach to this most-esteemed artist will certainly be disappointed, as will Middle-Earth fans expecting a Lord of the Rings origin story. Tolkien instead plays as a well-made and well-acted, if a little by-the-numbers, coming of age period drama. Karukoski's story details the childhood of Tolkien (portrayed by the very talented and well cast Nicholas Hoult) who is displaced as a boy after the untimely death of his mother and moved to Birmingham, England. There he falls in with a tight-knit group consisting of three fellow prep school students and creative types, whose mutual friendship in their days of youthful innocence, only to be tested later by the horrors of war, would provide much inspiration for the themes Tolkien would devote his life's work to exploring. Tolkien is also a love story, as the young Oxford-bound writer falls for his future wife Edith (the lovely Lily Collins), a kindred soul whose budding romance is conveyed with a bittersweet nostalgia thanks to Karukoski's soft lens and delicate framing. Intercut with these moments are scenes depicting Tolkien's harrowing experiences as a soldier in the trenches of World War I, where the horrific conditions and traumas inflicted would inspire the writer's visions of industry and war in "The Lord of The Rings", as Karukoski visually alludes to during the film's climactic battle set piece.

Tolkien is a film that may not be of much interest to those with only a passing knowledge of or interest in "The Lord of The Rings", and it's also obvious Karukoski is not interested in expanding on the traditional structure or conventions of the period biopic. This is understandable, but it's a little disappointing to think a writer who so completely transformed the world of literature through his imagination and use of language would inspire a film so conventional. Nonetheless, I feel compelled to commend Tolkien for its faithful respect to its subject matter and the themes of love, sacrifice, and fellowship it eloquently examines.