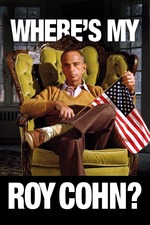 Ruthless. Unscrupulous. Powerful. Flamboyant. Notorious. These are the words printed in bold letters on the promotional materiels for Matt Tyrnaur's documentary Where's My Roy Cohn? All prove to be fitting adjectives to describe its central subject, that being infamous American lawyer Roy Cohn. Tyrnaur’s documentary profiles the New York City born Cohn's rise to power as a corrupt and charismatic figure in the world of American law and politics, and it also convincingly purports that his shadow still looms heavy over the world that he helped shape today. Born the only child to a well-respected Jewish family in 1927, the son of Judge Albert C. Cohn, Roy would become fascinated with the law (or perhaps more importantly how understanding law could be used to gain power) at a very young age, graduating from Columbia Law School before his 21st birthday when he wasn't even old enough to be admitted to the bar. Using family connections he would move up the ranks fast as an assistant attorney, getting his first taste of national prominence during the highly controversial Rosenberg Trials of 1951, producing testimony that would prove essential to the couple's conviction. Being a hardline anti-communist and supporter of the death penalty, he would argue strongly for their execution to send a message to other suspected communists, a decision that would loom large over the rest of his life. Cohn would go on to become the chief counsel of Senator Joseph McCarthy, playing a major role in shaping his anti-communist attitudes. Much of the early portion of the documentary focuses on Cohn's role during the Army-McCarthy hearings of 1954, specifically how his close relationship with G. David Schine influenced the proceedings. It would also be the first time Cohn's sexuality would be broached publicly, although as the documentary shows Cohn would spend his life a closeted gay man. When the Red Scare eventually began to fizzle and McCarthy fell out of favor with the public Cohn would refocus his efforts in the legal world of New York, where he would develop a reputation as a masterful, if not entirely ethical, attorney to some of the most influential figures in the city (not all of whose dealings were 100% legal.) Indeed, many of his most famous clients included numerous Mafia figures such as John Gotti, and Cohn would successfully enable such under-the-books criminal activity his entire career through a combination of legal savvy and an aggressive, take-no-prisoners approach to law.

For Cohn, the law existed to be bent to the will of those who had power, and the documentary does an effective job framing the man as a 20th century American Rasputin, counselling the most corrupt and criminal from behind the scenes while remaining something of a celebrity in the world of politics. Tyrnauer also doesn't shy away from examining the man's eccentricities and insecurities, especially in regards to his homosexuality, which, much like his Jewish identity, was something he always felt ashamed of. Perhaps most influential in shaping the world we inhabit today was Cohn's relationship to a young New York City real estate developer Donald J. Trump, who cited Cohn as a close friend and partner when he was first rising to prominence in the world of business and finance. The extent that Cohn would ultimately shape the views and methods of the 45th president of the United States is hard to say, but it's very telling that they would be close associates during their time, each obviously cut from the same cloth. That Cohn would ultimately be disbarred for unethical conduct in 1986 only five weeks before his death due to complications from AIDS is a sad and fitting end to the story of a man who made his living using his power to enrich the wealthiest and most corrupt at the expense of those less fortunate. Still, one can't help but feel that Cohn wasn't so much the cause of such American ugliness as he was merely a symptom of a system which was always designed to benefit the haves over the have-nots. Where's My Roy Cohn? is certainly an interesting and compelling documentary, but I can't help but feel that at the end of the day for all his brash bravado Cohn was just another corrupt suit who could just as easily be replaced by another, which is itself a sad statement both on the man and the world he came to inhabit.