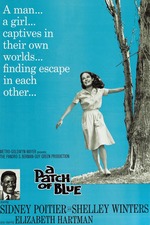 I’m definitely conflicted about this movie. It seems to be progressive for 1965; giving a big platform to interracial couples and preaching tolerance and that it’s on the inside, not outside that matters. Considering it featured a very controversial kiss between Poitier and Hartman, it was obviously breaking boundaries for its time. If this film came out today it would obviously be received differently because, as society should, we have progressed past a “color blind” concept.

Gordon saying “I don’t agree with your stance on race and politics” to his brother when he says to let white people deal with their own people’s education seemed like something that had to be said for the studios to green light the screenplay. Films like these always had to make white people feel comfortable at the end of the day: “there are very few racist white people, so white people can and should be tolerant! Just look at Sidney Poitier! He has no personality besides being polite and kind to a blind girl and is ultimately good and better than some white peoples and deserves no prejudice!”

Obviously Poitier’s character shouldn’t be the subjected to prejudice because he’s black, but a lot of these films made it seem like black characters had to be perfect, well-mannered, and without any flaw or passion to be deserving. It’s a problem with most movies of this era with their hearts in the right place. I’ve been reading the book “Pictures at a Revolution” and it goes into Poitier’s career leading up to In the Heat of the Night and Guess Who’s Coming to Dinner. Unfortunately, these roles of Poitier being an “exceptional” black man seemed to be all he could get. He realized at one point he was only big black actor, so he had to be a representative for his entire race in film. It wasn’t until In the Heat of the Night that one of his characters got to show real passion and personality that didn’t have to just ignore racism and tolerate the prejudiced whites around him. Not to say these roles are inexcusable- they’re certainly important and progressive for Hollywood in 1965- they just didn’t give enough autonomy, depth, and inherently human flaws to black characters.

On the other hand, this move is extremely watchable and the interactions between Gordon and Selina are pure and endearing. The scene where they go grocery shopping is so fun, light, and charismatic and you just get the understanding that these two people truly enjoy each other’s company. The film is also supported by an incredible score. The somber piano playing as Gordon watched her leave and the exciting score that plays along to the bead making gives so much more emotion to the relationship.

The film may be flawed in terms of outdated socio-political messaging, but is still a joy to watch when you know it’s coming from the right place. The streak continues of never disliking a Sidney Poitier performance.