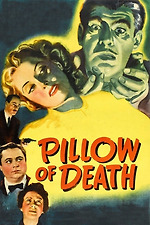 Julian Julian: My dear fellow, the word abracadabra is anathema to the true believer in the occult.

Tempted to give this four stars given how it is by far and away the best of these Inner Sanctum Mysteries. Lon Chaney Jr. stars once again, this time as an unfaithful attorney who falls under suspicion when his wife is found murdered. Given the third degree by an occultist who organises commune with the dead to delve deeper into the case at hand, Chaney’s Wayne Fletcher is the characteristic fraught man in the frame for murder that at this point Chaney slips into like a favourite pair of old boots.

The seance elements, the dead speaking, the paranoia of Fletcher, and an ending that subverts any Inner Sanctum fans’ expectations by NOT doing what the previous five films have done when it comes to Chaney’s fate, all of these tasty cinematic morsels convalesce to create something authentically creepy and genuinely tense.

Though the Inner Sanctum Mysteries have never exactly been looked on as the greatest run of these kinds of films from the era that brought us all those wonderful Lugosi and Karloff pictures, Lon Chaney Jr.’s commitment to them and their uniform satisfaction of the basic tenets of the series’ premise make them an enjoyable way to while away six hours. Though Lugosi and Karloff may have proven immortal and iconic in ways history has deemed less befitting of Chaney Jr., it is doubtless to say that the man who gave us The Wolf Man had something magnetic in his manner on screen - “Nothing is more natural to me than horror” Chaney once remarked, and regardless of the individual merits of each Inner Sanctum outing, it is safe to say that he never looks anything less than at home in a swirling storm of murderous plots and macabre goings on.