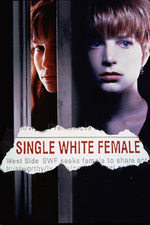 Doubled this with The Hand that Rocks the Cradle for a night of psychosexual melodrama. The two contrast each other well. Cradle resides in affluent suburbia, deals with female competition, and has a sort of blankness (not blandness) in both the spacious set design and De Mornay’s excellent, vacant performance that plays the shamelessly manipulative material straight. SWF, on the other hand, is aglow with oranges and blues, concerns itself more with the perils of friendship, and is much, much sleazier. Among the four leads, I’d say Jennifer Jason Leigh has the trickiest performance and, of course, outshines them all. Both her and De Mornay manage to elicit sympathy for characters that deserve none. I’d give the edge to Cradle for its streamlined pacing, though perhaps that was bunny-boiler fatigue setting in. This is just too twisty for its own good and runs out of juice with about a half hour left. Scratches a certain itch though if you like those 80’s/90’s films where idle twentysomethings inexplicably generate enough income to live in a massive New York apartment.

The Hand that Rocks the Cradle