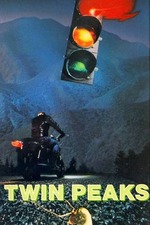 I've spent the last week bum-rushing the series in order to catch up to the revival episodes. Here are some observations:

• I like that the very first image we see in Twin Peaks after the majestic, curious credits is Josie Packard making herself up in front of a mirror. The sight of the inscrutable, troubled charlatan alone with her reflection feels like an immediate affront to the insidious evils of higher-ups — perhaps fitting for a show that was supposedly botched by the powers that be at ABC. Though admittedly nonsensical and probably incidental, Laura's body washing up on the shores of the Packard Mill feels vaguely metaphorical when accounting for Leland and the Great Northern. Something something business something something evil, basically. Even scoring Dan O'Herlihy (the nefarious villain behind the Silver Shamrock master plan in the underrated Halloween III) as Andrew Packard seems like more naughty send-up of evil businessmen.

• It's funny how binge-watching Twin Peaks illuminates its flaws. As everyone in the world has noted, dispensing with the overarching Laura Palmer narrative in the middle of the second season is a catastrophic blow to the mystique of the series. Once the killer is revealed, characters who were once suspects are relieved of their suggested evil. With the mystery gone, camp — something always present before but never in full force — unfortunately floods in to stop the hemorrhaging and that dark underbelly is mostly lost.

• One of the more striking "throwaway" moments comes after Laura's funeral. We're taken to the Double R and before the camera pans to Cooper and Truman, we're privy to Shelley mocking the service to some nameless locals. Leland Palmer had dove into the grave on top of Laura's casket and began wailing. Shelley is imitating this and the old fogies guffaw in retort. Shelley, while hardly a saint, is depicted as a hard-working, put-upon, abused young wife. Bearing witness to her so swiftly ridiculing a grieving father speaks to the banal cruelty Lynch so often unearths in his work.

• Immediately after finishing the then-series finale, I watched the pilot again since I hadn't watched the first three episodes as close together with the rest of the series. (I'm obsessed.) The two episodes mirror each other in interesting ways (Bobby and Shelley interacting with the giggly German waitress, the juxtaposition of Nadine and Mike's attitudes towards Ed, Cooper's complete unraveling, Audrey's about face) but it highlights an issue I can't excuse. The death of Laura Palmer in the pilot episode is an event of unprecedented magnitude, so seismic that Cooper notes that death is "not a faceless event" in a town like Twin Peaks. But after the murder of Maddy Ferguson (Laura's cousin and doppelgänger played by Sheryl Lee, the same actress), the suicide of Howard Smith, and the unnerving circumstances surrounding Leland Palmer's life and death, no one really seems to care. Accommodating Lynch's fluid logic for everything, it could play as a comment on beauty, that we care more about the death of a beautiful, blond girl than anyone else. But after revisiting the iconic pilot, it seems more accidental than anything. That type of "picking up the marker and moving it" stuff comes with the territory of a television series but it can't help but negate some of the stakes and continuity of Twin Peaks.

• I greatly enjoy Michael Ontkean's work as Sheriff Harry S. Truman, but I think the strength lies in how the character is written. The character is depicted as nothing but competent, thoughtful, and gracious but he's got an unstable edge to him. When confronted with personal demons, he turns to violence. That doesn't mean he goes in guns blazin' or that he's quick to throw a punch. He just doesn't take any shit. This pugilism is thwarted beautifully by his second altercation with Albert, an interaction that has a noticeable impact on Truman. By the way.....

• The sudden shift in Albert Rosenfield's temperament — after he proclaims to a miffed Sheriff Truman that his worldview is informed by love — is fitted to longform storytelling's rewarding character arcs, but I still find it somewhat cowardly. Perhaps Lynch and Frost saw his character as a way to bridge the gap between cynical city folk (how detractors often view Lynch and his work) and the rustic people of Twin Peaks? Either way, I think Ferrer's ferocious performance as the brilliant forensics analyst is somehow nuanced enough to couch glimmers of humanity in his barbs and mean-spirited quips anyways. On one hand, it too explicitly showcases the empathy or basic decency that almost every character in the show exhibits at some point. On the other, it isolates the truly evil characters like Bob by showing how they have zero redeeming moral qualities.

• I find it sort of perversely amusing that David Lynch's arrival as Gordon Cole signals the series' descent into absurdity. Lynch notoriously hates the second season, so it's funny that his character is a bit of a microcosm of the show's tonal fluctuation. On a moment-to-moment basis, he's funny enough but the shouting shtick gets old. Take a step back, though, and Cole is much easier to swallow when you exclusively view him as an even more eccentric version of Dale Cooper or like the charming uncle showrunner dropping by to see how his little creation is doing. There's also the matter of Lynch modeling Cooper after his own quirkiness and that character's perfection; maybe, a little egotism on Lynch's part?

• Given the trying, convoluted second half of the sophomore season, it's nothing short of a miracle that there are only two characters that suck in Twin Peaks. Two. Leo Johnson and Windom Earle. Perfect, then, that the two end up together. Leo's a lunkhead that the show turns into a ticking time bomb, resulting in one of its most terrifying sequences when he finally awakens from his coma. Earle, however, possesses no such saving grace. I hate the character and the actor who plays him. Top to bottom, Windom Earle fucking sucks.

• While I'm sure the weaknesses of the series were harder to forgive during its initial run, the two seasons manage to encapsulate many of the aesthetic and thematic qualities of Lynch's feature work in retrospect. First, there's the rural town tucked away and the festering evil thriving underneath it (Blue Velvet, which I regret to say is kind of rendered obsolete after this); the folksy, laconic charm of quiet living (The Straight Story); the WTF-ery, unsettling imagery, and go-nowhere, "mechanic shacking up with the bossman's wife" storyline (Lost Highway, the latter being a sort of dry run for Balthazar Getty's predicament); the stark contrast between pure, unknowable terror and a soapy, emotional core (Mulholland Drive); as well as bikers, Jack Nance, and anything else weird in the margins (Wild at Heart and Eraserhead, respectively, as well as the movies of his I haven't seen).

I will add more if I think of any. Until then, Bookhouse Boys.