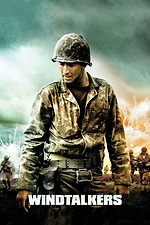 Putting aside how problematic the POV angle is on this, and how quick it is to through a lot of it's important subtext is either brushed aside or put through the ringer of cop out cliches, 'Windtalkers' is a fucking blast of a war movie, one of the best there is.

Nic Cage is a firecracker in the lead role, with his intensity being put on full display from the films opening battle sequence. His performance is physical as well, as he jumps, dives and somersaults around the screen all in service of Woo. Adam Beach does a ton of great work in the films second half, displaying a truly palpable rage in the films final act that works as the perfect antithesis to the final shot.

Woo's direction and scale here are tremendous. There's so many long, single takes which in the middle of such well choreographed sequences is really a feat. His use of slo-mo amps up the brutality, as do his explosions, which for some reason I couldn't take my eye off of. Every battle, and there are quite a few in this, Woo shoots the hell out of, he always seems to have the right angle and follow the right character.

'Windtalkers' might be problematic in that it doesn't cover the ground it should, but it's still a wildly exciting war movie.