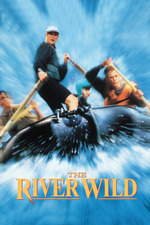 Saw this was on Netflix and just clicked on it not expecting to watch the whole thing. I was really into this movie for some reason when I was a kid. I think because Joseph Mazzello was in it (I was obsessed with Jurassic Park) and there was something super cool about kids my age being in serious thrillers - even though this movie is weirdly jaunty and family friendly(?) for a thriller that sort of combines Cape Fear and Deliverance.

It's kind of cool to see such top-notch actors in a story that could easily have been a Lifetime Channel movie-of-the-week. Kevin Bacon so easily straddles the line between charming and creepy. Meryl Streep goes full badass. David Straitharn plays his arc expertly. Little Joseph Mazzello brings it. And to my surprise John C. Reilly! Doing his John C. Reilly thing as great as ever.

Weird little movie. Not sure I'd call it a gem, but it is an oddly satisfying watch.