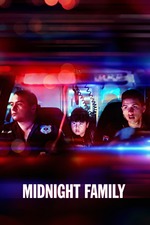 A glimpse into a privatized emergency healthcare hellscape during late stage capitalism.

The Ochoa family's for-profit private ambulance literally races other ambulances through the streets of Mexico City in competition to arrive at nightmarish disasters first. They give kickbacks to corrupt cops to keep them from constantly harassing them; receive kickbacks from hospitals to bring patients to them, even if that hospital isn't the closest or most ideal destination; beg grieving loved ones and the injured for just a few pesos in return for their service; live on canned Tuna, the only meal they can often afford; and scrub blood off the equipment in their downtime.

The opening text of the film tells us that fewer than 45 public ambulances serve a population of 9 million people in Mexico City. The rest of the emergency healthcare response is provided by people like the Ochoa family, careening through the world, stuck in a deeply broken chaotic system that often incentivizes not doing the right thing for their patients.

A fast-moving social suspense film where none profit and few are even served.