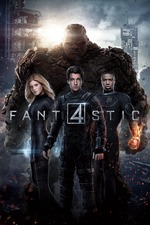 Okay first of all, I thought it would be GREAT if I searched FF2015 and the shit wasn’t even on here. Low key I kinda was hoping it wasn’t. But it was! And I’m here. Anyway. Where to begin...

The movie is ALRIGHT.

I was expecting it to be much worse than it was. I literally haven’t seen it since like two weeks before it came out, and I was in a heavily fucking traumatized state of mind. Why? Eh, save that for another time.

Everyone in the film is a great actor, and overall there is a movie in there, somewhere. And that cast deserves to be in THAT movie. Everyone who worked on Fant4stic clearly wanted to be making THAT movie. But.... ultimately... It wasn’t.

Did I make that movie they deserved to be in?

What I can tell is there are TWO different movies in one movie competing to be that movie.

Zack Snyder is a storied, iconic, legendary filmmaker who has been knocking it out of the fucking park since I was in high school.

I was 29 years old, making my 2nd film, in a situation more complicated than anything a 2nd time filmmaker should’ve walked into.

And I just hope Peyton Reed makes the next Fantastic Four and crushes it. And that I get a cameo.