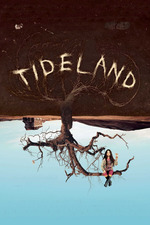 Simultaneously Gilliam's masterpiece, yet the worst film I have ever seen.

There doesn't seem to be any deep analysis on the film here on letterboxd; and I don't have the energy to write one right now, but I'll write some quick thoughts:

1. Tideland is not intended to be light-hearted, or dismissive in the way that some people have taken it. Tideland is a rather dark, yet innocent look at some terrifying adult subject matter.

2. This is not typical Gilliam. At first it may seem like it, but as the film progresses, it becomes less and less so. Even in The Brothers Grimm and The Zero Theorem you can find countless instances of Gilliam's trademark humor. Here, in Tideland, there are short bursts of humor (various instances include the taxidermy scene, one rather memorable scene just after Jeliza-Rose's mother has overdosed at the beginning of the film, and perhaps everything between the 25 and 45 minute mark).

3. Tideland is not for everyone. It's an incredibly accomplished film both on Gilliam's behalf as well as the actors, and screenwriters, but some people will be repulsed by the way it tackles subjects such as child abuse, molestation and substance abuse.

4. This is the kind of film I have come out of not knowing what to feel. I'm not totally enamored (as I was with Calvary or Cloud Atlas) or totally emotionally destroyed (such as with Dancer in the Dark or Grave of the Fireflies). This isn't the kind of glorious not-knowing-what-to-think-because-it's-so-good that came after viewing the most perplexing films I've ever seen (think Under the Skin or INLAND EMPIRE), but it's not the type of underwhelmed but slightly overwhelmed neutrality that came after I saw something like Dogville (which I have since decided I didn't enjoy much at all).

The feeling I have now is one of feeling so disconnected from the events portrayed onscreen that I HAD to have been connected during the film. Right?

5. Gilliam has crafted an absolutely fantastically, brilliantly misunderstood film - easily his most hated film. Yes, more so than The Brother's Grimm. I can't tell you what this film is about.

Oh, also, Jeff Bridges plays a corpse for 90% of the movie. And he plays it well.

Gilliam has crafted a masterpiece.