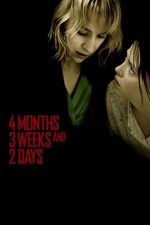 Romania, 1987, the last days of communism. Otilia and Gabita are students and share a room in Bukarest. Gabita is pregnant. They meet with a man named Mr. Bebe in a cheap hotel, he will execute the abortion Gabita wants. But Mr. Bebe doesn’t want money, he asks for something else.

As an audience we are very close to everything that happens. The use of a shoulder camera gets us very close to all the happenings and there are hardly any cuts in the film. There are many scenes where the camera doesn’t move and we just see it as it is. This visual style looks cheap, but is perfect for a movie as delicate as “4 Months, 3 Weeks & 2 Days”.

This also gives us some moments that could have been left out, like a certain dinner scene. This loses your attention a bit. It takes your attention away from the actual plot. Luckily it’s only that one moment. The rest of the film feels very realistic, has an anguished feel to it. And the start is very mysterious if you don’t know too much about the plot.

The actresses in the film, who are relatively unknown, add believability to the film. “4 Months, 3 Weeks & 2 Days” won a Palme d’Or in Cannes and I totally understand why.

It’s a confronting film, really strong and worth your time.