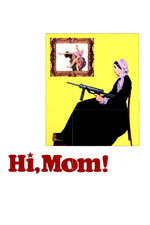 When you dissect the films of Brian De Palma, they feel separated by different styles, segments, or chapters. His filmography, whether you like the films or not, show an auteur as he progresses through the form, changing his style and balancing his old-school ideas with his observant and fresh new ones; his early works feels more satirical and evaluative, while his 70's work is arguably his most diverse work - De Palma tackles so many genres in this decade, furthering his skill in each said genre - and probably his most fascinating, the 80's and 90's see De Palma tackling his thrillers and crime dramas, and the modern age sees De Palma experimenting with forms and genre.

But the thing is, as much as I love De Palma's work - ranging from the Horror masterpiece "Carrie," to the tragic and brutal "Blow Out" - "Hi, Mom!" manages to showcase De Palma at his most prominent, his most observant, his most horrific, and his most satirical; it is a work that manages to feel so in-tune with the decade it's crafted and set in, while manages to still feel so modern with its thought and calculations. In many ways, it's De Palma's best work, a work that feels so unlike anything of his I've ever seen, yet it's the culmination of each style he's toyed with: the satirical of the early work, the diversity of the 70's work, the grit and thriller of the 80's and 90's, and the experimentation of his modern work, while still showing his undying love for Alfred Hitchcock.

But Jon makes a fool of himself and decides to abandon the Porn and therefore, abandon the filmmaking by trading in his camera for a tv set; this is telling of his voyeuristic views: if he cannot create the "Peeping Tom" idea, he might as well partake in it. Jon finds himself getting involved in the black radical group De Palma introduces early in the film; their mission? To get people to understand what it's like to be black. In the most iconic sequence, Jon becomes a performer in this show and he and the radical group show a group of white men and women what it's like: they eat soul food, wear shoe polish on their faces, and are terrorized by the radical group, who wear white paint and pretend to be white people. Jon comes in as a policeman and attacks the white men and women. De Palma is (admittedly, not so subtly, but it's still so good) showing us the struggle of Blacks in this period; at the end of the show, the white men and women walk out and rave about the performance, saying their lives have changed. It's a start, says De Palma, but change is still needed.