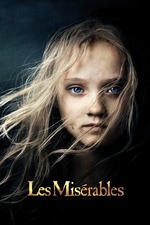 Weirdly enough, I think Les Misérables is a difficult film for me to talk about for two reasons: I've not read the novel or seen the show this is based on and that if I write anything negative about this film, my girlfriend may smother me in my sleep – joking, of course... I hope... Anyway, the real second reason is that I can’t quite figure out the intention behind nearly every single thing Tom Hooper does except justify it as being “good ol’ classic Hooper.” Do I admire Hooper’s craft as being an extremely complicated and problematic one that indicates little to no comprehension of the camera, or do I admire Hooper’s craft as being almost self-aware in its boldness? I couldn’t tell you. What I can say is that this particular work, whether you love or loathe it, is incredibly ambitious – that much is evident in the scope of this work alone.

In general, I'd like to believe that the craftsmanship that went into this film is rooted in bold and oozy love for the source material – from what I've read, that seems to be evident – and for a work that’s mainly about the different factions of love, I think the film works as a blatant and chaotic, yet unflinching work that showcases Hooper’s admittedly incredible comfort for scope and vision (even if the film, at times, looks absolutely horrendous!) but also reveals an alarming misunderstanding on the camera and, more specifically, his overuse of the Dutch Angle amounting to nothing. Hooper’s choice in having many of the moments be filmed via (what seemed to be) handheld is both a bold choice, but one that loses its flavor once you realize that this, and its marriage with the Dutch Angle, are the only attempted technique in conveying emotion and it just gets stale.

In talking about the film with my girlfriend, who would give this a 4.5/5 if you were curious, I mentioned how awful the pacing of this film was. What I should admire about this film is how in the scope, the ambition spreads to the narrative structure of the film – it jumps roughly 4 or 5 times before it ends. What makes Les Misérables problematic with that choice in structure is that its abruptness in cutting from time period to time period indicates a failure on Hooper’s part to end each segment properly; I don’t know if that’s how the actual show goes, but I just found the film’s messiness in structuring its narrative a blatant failure in understanding both character development (which we’re never really given anything to grab onto) and its pacing: moments that feel quick are rapidly cut to moments that linger longer than they should – maybe that’s the experimenter in Hooper (pfft) but it just doesn’t do anything for me here.

The film ultimately is a chaotic smorgasbord of bizarre talent and eccentricity – it mostly lands as an almost admirable piece of Blockbuster filmmaking and fails entirely in developing anything proper: narrative, development, emotion – in fact, the only time I felt emotion from this was from Anne Hathaway, who is tremendous in her role as the tragic Fantine, and oddly enough, Russell Crowe as the Bootlicker Javert, who gave me so much rage and laughter every time I saw him on-screen (and Crowe’s singing? Really fucking good, I'm sorry) while Jackman’s performance was good, but too obvious as an attempt to gain awards and everyone else ranged from decent to awful – Eddie, I'm looking at you, you motherfucker. Remember me? I’m the one who said they wanted to fight you at the 2019 Chicago International Film Festival right as you walked past me with your entourage. On site, motherfucker. On. Fucking. Site.

The movie is pretty good, I'd watch it again. Just a weird time! Love my girlfriend!