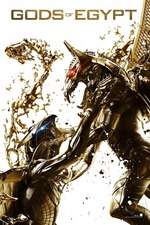 It’s a generic fantasy story but the idea of the gods of Egypt actually living amongst men, as giants, is interesting. Sadly, the generic storyline, which most of these blockbustery films have anyway, isn’t improved by super miscasting, crappy acting and some shitty CGI.. the effects aren’t ALL bad but there’s a couple of moments where it’s just terrible.

There is some interesting set and costume design though, so that’s a plus.

To Watch is using Letterboxd to share film reviews and lists with friends. Join here.