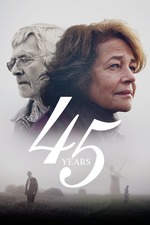 Every once in a while a film comes along that is so natural, so real, that you forget that you’re watching a film, but rather become the proverbial fly-on-the-wall. Heneke’s heartbreaking Amour is a recent example. 45 years is just such a film.

Also in common with Amour is the fact that it’s practically a two-hander, and stars two veteran actors in their senior years. Where Amour deals with love’s unbreakable bond, 45 years, alternately tells a story about how the seed of mistrust, once planted, is difficult to keep from springing forth, and threatens just such a union.

45 Years is paced at the speed of life, and director breaks the drama down into a week’s worth of daily chapters. We learned during the Q&A that followed that writer / director Andrew Heigh took the more difficult and expensive route of shooting the story in scene order as to nurse out the delicate nuances needed from the performances.

Both Tom Courtenay and Charlotte Rampling, as Geoff and Kate Mercer, a British couple about to celebrate their 45th wedding anniversary, give career defining performances, but it’s Rampling that makes the film the masterpiece it is. This is Kate’s story, and much how Rampling conveys it is with subtle expressions. Yes, there is dialogue that moves the story forward, but the story is as much about how Kate is emotionally effected as it is about the narrative arc.

45 Years is an actor’s film, and an absolute triumph. It reads like a play, but never feels stagey in the slights. To crown the achievement, Heigh delivers one of the most subtle, yet remarkable endings I’ve ever seen.