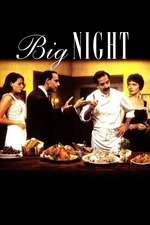 Yesterday, when reading another member’s great observations of Mostly Martha, a chef centric film I quite enjoyed, I noticed he ended with the observation that while good, it wasn’t quite the culinary classic Tampopo, Babette’s Feast ( both of which I consider masterpieces ), Big Night, and Like Water for Chocolate were. I commented on his review that I’ll have to see the latter two, as I loved the former two. I mentioned this to Lise, and she exclaimed ‘you haven’t seen Big Night?!!’ Of course, she had already collected it, and within minutes it was lighting up the screen.

Like my beloved Babette’s Feast, Big Night steers towards a comestible climax, but unlike Babette, Big Night is more a story of brotherhood and dreams, passion and principle, and how they delicately, and sometimes not so delicately, interplay. While there is an incredible ensemble cast, this is really director / star Stanley Tucci and co-star Tony Shalhoub; both veteran second bananas in Hollywood's film. The secret sauce is that both of these two incredibly gifted, and criminally underutilized, actors have the chops to believably come across as true paisons. Sometimes with a lot of words, sometimes with none at all. I was particularly impressed with Shalhoub, whose quirky / schlubby characters I've always enjoyed, but never had an inkling he was capable of such depth.