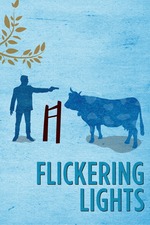 Lise and Jonnie's What A Wonderful World 2015

I really didn’t know what to make of Flickering Lights as I watched it as my second feature on a plane ride home from a trade show. There were elements of The Usual Suspects, Pulp Fiction, Millar’s Crossing, In Bruges, and The Man without a Past. There was something else, though, and I couldn’t quite put my finger on it.

One might rightly describe a criminal and his crew stealing from his even more criminal boss a well-worn hat. Yet, there was something new, but somehow familiar about Flickering Lights. The loving opening makes you think that you’re going to be told a yarn about a group of war buddies, but immediately after that you’re jolted into a scene where a hapless transport truck driver, charged with fetching a load of illegal smokes, is beaten to death by our group of friends because he mistakenly boosted menthols. Right off the bat it makes this film an odd duck, and rather hard to reconcile.

Needless to say the boss, isn’t too pleased with our crew, and this sets everything in motion. They steal from The Big Guy, and go on the run … destination Spain. Things don’t go entirely according to plan, and a rest stop is required. What follows is a collection of scenes that are alternately tense, melodramatic in flashback, and absurdly dark comedy. I’m kind of liking it, but I still can’t place my finger on where I’ve seen this particular mix before. I’m also pretty positive one of our crew is Mads Mikkelsen, but he looks so young that I can’t be positive.

With half an hour to go, our pilot put on the seatbelt sign in preparation for descent, and all movie watching devices had to be stowed.

After arriving home, late in the evening, I was too tired to finish that last half hour, but I did have to peek into IMDB to see if it was Mads or not. Yes, it was, but what I discovered was that it was directed by Anders Thomas Jensen, director of Adam’s Apples … a little gem I watched and loved not too long ago. Now it made sense. This was exactly the humor and pathos Jensen delivered in a more refined form in in Apples, but just a bit undercooked here. By saying undercooked, I simply mean that Jensen telegraphed the absurd humor so subtly here, that you have a hard time telling if he wants you to laugh or not. I think it’s more a failing on me, the viewer, not being able to suss it out than on Jensen.

Now, going in being informed, the last half hour was brilliant. I’ll have to go back and watch again to see if there was a bit ore a turn to the absurd in those last 30 minutes, or if the knowledge I gained just allowed me to appreciate it more. I have to say, this guy is dryer than Aki Kaurismaki, that’s for sure.

And yes, it’s all about family.