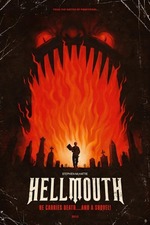 Like the cult up-and-comer Pontypool before it, Hellmouth is based on one of the Tony Burgess ‘Kawartha Trilogy’ horror books; in this case the first installment,The Hellmouths of Bewdley.

Also like Pontypool, Burgess himself re-imagines his novel for the screen, with equally bizarre results. Pontypool, the film, was transformed into an observation from a blind vantage point of his Pontypool Changes Everything. In Hellmouth Burgess and director John Geddes take the opposite course. They weave elements from the disjointed, but connected, vignettes that make up the novel into a highly visual and atmospheric narrative influenced heavily by fifties monster films, the stylistic modern noir Sin City, and a healthy dose of Lynch’s Eraserhead.

This is one of the films biggest problems … it just kind of wanders between these disparate styles at its own convenience. Story arc and plot kind of take a back seat to the visuals, which leaves you kind of wondering, WTF is going on? What the hell is that key for? Why can you never be more than ten feet away from it? Why is that guy so dusty?

Letting it simmer now for a few days, I don’t think any of the above flaws really matter. Like a fellow Canadian Arthouse Auteur Guy Maddin, it’s more in the way the story is told than the story itself that’s important. You can enjoy Hellmouth just for it’s wonderful visuals and loose metaphors about redemption.

The always great Canadian workhorse Stephen McHattie ( who has amassed over 200 acting credits in his 50 plus year career ) ties Pontypool and Hellmouth together in a loose and gruff Burgess way. This guy's face is the very definition of ‘texture’, and cinematographer Jeff Maher takes advantage of every crack and crevice. As it’s such a small industry up here in the Great White North, it was also a smile to see Pontypool director Bruce McDonald chew the scenery as one of the unfortunate former Crypt Keepers who has succumbed to … er … something … we don’t really find out.

I may be kind of predisposed to like it, as, like Pontypool, Bewdley is a real place, and only about 20 minutes from where I live. It saddens me, though, that a project like that, that obviously is imbued with so much creativity and love didn’t even get a theatrical release …. Even up here in Canada!

This film looks far better than it ought to. If you scrutinize it compared to the Quarter Billion dollar Hollywood output, yes, it can be found wanting, but I suspect that the budget, like Pontypool, was under two million dollars. Perhaps under a million. I was also saddened that they launched an Indigogo to try to scrape together $60K to complete all the green screen CGI ( like Sin City, it’s entirely green screen ) and netted less than $2K.

It can be found on the web, but, If you want to throw them a few bucks for their effort you can rent or buy it on Amazon for pretty cheap.