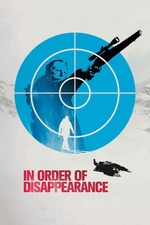 March Around the World 2018 Edition

Often playing an irascible jerk, there’s always something special that bubbles up under all that crust. My favourite role of his was the somewhat befuddled hitman Ulrik, just released from prison, and now being reintroduced into criminal society in the brilliant A Somewhat Gentle Man. I guess I love that one not just because Skarsgård plays against type, but rather that he plays a character much like the many others he’s played, but possibly seen from another light … a sympathetic light.

In Order of Disappearance grafts the kinder, gentler, Skarsgård into a Death Wish like revenge actioner. His character, Nils ( with the unfortunate surname of Dickman .. a fact not lost on his new found enemies ) with spectacular results. Dark as coal humor elevates the film above what would otherwise be standard action fare, but it’s subdued, and never tries to take centre stage.

Being Canadian, It gave me a special kind of pleasure that our protagonist uses a snow plow as his weapon of choice.