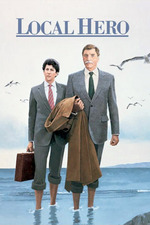 Local Hero has been on my radar for quite some time, as it’s the favourite movie of a long time friend.

While the story began to unfold, there was something naggingly familiar, yet I couldn’t quite place it. Waking Ned Devine? The Englishman Who Went Up a Hill but Came Down a Mountain? Then it hit me; this has the same gentle yet wry sensibility of a film I love dearly - Gregory’s Girl. Duh! Of course I was too dense to realize until I looked afterwards that both were helmed by writer / director Bill Forsyth.

I found a lot of similarities to Gregory’s Girl; a self assured, self righteous, male being slowly and lovingly brought down to earth by a wise female, all in view of a smallish community. The added element here, though, is Burt Lancaster’s industrialist character that sets everything in motion. This new contrivance mostly worked for me, and it’s a pleasure to see his performance, but the necessity to have his character, most likely due to his stature as an actor, have significant screen time rather worked against the film for me; particularly with the therapist sub-plot that seemed entirely unnecessary, and rather Pink Panther.

Although I prefer the simplicity and heart of Gregory’s Girl, I still enjoyed Forsyth’s particular brand of quirk, and how he plays it so well with his cast of characters. The small moments, and incidental characters, really make this film rather than the big ones.

While writing this, another film came to mind. A small 2003 Quebec film, La grande séduction … English title Seducing Doctor Lewis ( not to be confused with the 2013 English Canadian remake ‘The Grand Seduction’ ). If you’re a fan of Local Hero, I would highly recommend seeking out La grande séduction.