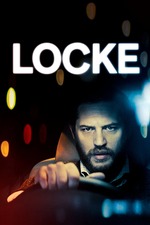 I rarely will declare a rating right after I watch a film. Usually, I’ll log it, and let it drift around my subconscious for a day or more, and then usually not until I’ve thoroughly thought it through while compositing a review. Not Locke. I knew I considered it a masterpiece right away, and worthy of a full five stars.

Two handers are difficult to pull off, and that was only emphasized even further to me during my recent viewing of Charlotte Rampling and Tom Courtenay’s performances in Andrew Haigh’s 45 Years. The success was the subtle depth that lurked beneath the banal that was encoded in the script, and perfectly realized by two experienced veterans at the peak of their talent.

Locke does as much with half.

The beauty of Locke is that it is a purposeful and difficult one man mission of honor and responsibility wrapped in bromide conversations that can sometimes be as frustratingly tedious as the central obstacle in the film, a motorcar trip from Birmingham to London. Writer / director Steven Knight insightfully judged that you make up a complex mosaic with average parts, and these average parts in Locke … 34 mobile phone conversations with 11 different people who make up the framework of Ivan Locks’ life on that particular night, is more than the sum of its parts.

One conversation, with a city councillor with whom he’s had the briefest of contact in the past, and who is annoyed at being disturbed at dinner, is just as important in his mission to do the right thing this night as any of the other conversation with those who are much more important to him. When the annoyed councillor finally relents and agrees to Ivan’s late night request, it’s because, according to him, that Locke was always a stand-up guy. That small line speaks volumes about our character, and helps define the entire narrative of his journey.

Like 45 Years’ Rampling and Courtenay, there would be no hope of a story like this, with only a thread of an arc, and dialogue that might be overheard on any downtown street corner, could work without an actor with prodigious chops. Tom Hardy is just such an actor. There are no impassioned speeches, there are no tearful breakdowns, it’s all just in the subtle depth that’s lurking below the obvious and the tedious. The looks of frustration, of weariness, of resignation, and finally of relief. The kind of relief you can only feel when you arrive at the end of a long and trying journey. Those are the moments that make the film what it is.

Even though in many ways Ivan Locke loses, the small win he achieves is essential. Even though Locke is only 34 mobile phone conversations over 86 minutes in one claustrophobic moving set, it's one of the best examples I've seen of synergy in film.