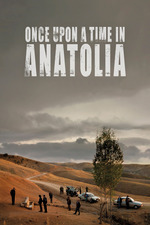 I’ve been ruminating on Once Upon A Time In Anetolia for a bit now. What I can’t keep from popping into my mind is hearing this as a Hollywood pitch.

“It’s a murder mystery road trip movie. A hard boiled tough as nails detective, cool as ice Doctor with a mysterious past, suspicious Prosecutor, and a supporting cast of dim-witted fun loving buddies take a midnight journey to find a body buried somewhere in a field with a fountain. Hilarity ensues when the drunken perpetrator can’t quite remember exactly what field and fountain it was. Through the course of the evening they all discover that their common bond is girl trouble. Enter the beguilingly beautiful “Cemile” that the group meets when they make a pit-stop to chow down. Just imagine what happens when the lights go out!”

"We call it Road to Anatolia"

What a different movie that would have been.

Fortunately, this was a Nuri Bilge Celan film. I've seen Climates and Three Monkeys, and loved them, so I was prepared for Celan’s unique blend of visual poetry and well drawn characters ... and of course the ‘slow as molasses running up a hill in January’ pacing. It didn't disappoint, and this is my favourite so far. Of the three I’ve seen, each new film progresses with even better visuals, imagery, characters, and story.

For those subject to tl:dr syndrome .. do yourself a favour and stop here ;) The remainder is just rambling.

Although tongue in cheek, I my imaginary Hollywood pitch actually sums the story up. What is completely different here is how the characters interact. They don’t bond, they ‘radiate’. Each character being subtly or profoundly affected by the broadcasts of the others, causing them to examine their own thoughts and feelings. No bonding, no friendships, no cathartic moments .. if anything, introspection that leads to more isolation. The self realization is not shared, but rather kept private. Humor is there, but subtle as opposed to pie-in-the-face.

Visual metaphors abound. It will take me several re-watches to take them all in. One I particularly noticed is what appeared to be dry blood staining the face of the Prosecutor, and later the fresh blood on the face of the Doctor.

Although slow .. and long .. I didn't feel antsy at all during the first two acts. The continuous conversation kept me enthralled and connected. I just wish I could understand Turkish so I didn’t have to keep glancing down from the gorgeous cinematography to read the sub-titles. However, this pacing changed entirely during the third act. I was now struggling to keep awake. Gone was the continuous banter of the journey, replaced with long mostly silent scenes. I perked up during the final autopsy scene, and felt fulfilled. I was fully prepared for Celan’s trademark ending style, and anticipated it with pleasure.

I had knocked a star off last night when I logged the film because I perceived the drastic change of pace in the third act to be a bad decision in an already slow 2:40 film. This morning I chanced upon an imdb review where the writer observed that Celan may have used this device to instill the same fatigue in the audience that the characters would be feeling after being up all night. I hadn't thought of that, but it seems to ring true. I do maintain though that it was a risky move. I’m bumping it up to 4.5.