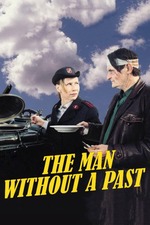 After last night’s viewing of Calamari Union, which I had high hopes for but ultimately left me disappointed, I really needed a sure fire Aki to put my mood right. Tonight was Thursday, which is the night that we have our neighbours over for a movie. Now, Aki is often an iffy sell, but I really wanted to rewatch one of his cannon that I loved, and also wanted to see what a completely fresh set of eyes would see.

Compared to Calamari, which didn’t win my heart, and the not too far removed temporally Take Care of Your Scarf, Tatiana, which I adored, Man Without a Past is a much more mature, refined Kaurismaki. Gone is overt absurdist and broad stroke allegory ( which I still love, BTW ) in favour of a lens shifted onto the disenfranchised, and a much more sly and subtle allusion regarding their state and their fate.

Of course this transformation isn’t sudden with The Man without a Past, Kurismaki has been moving in that direction since way back. It’s just that this one was the first where his view just seemed so smooth, seamless, and accomplished. Bittersweet, warmth, humanity, camaraderie, and the always underlying dry-as-dust humor are blended in perfect harmony.

Kaurismaki’s long time cinematographer, Timo Salminen, works his magic again with endearingly simple colour and composition. You can tell a Kauasmaki film almost by viewing a single frame. In a word, it is elegant, and perfectly reflects the deceptive simplicity of his stories. It wouldn’t be a Kaurismaki without his beloved and trademark music. It’s omnipresent, but not guiding. It sets the mood. Of course, it has to pop centre stage with a live performance at least once in the film, and this is always welcomed and anticipated. And so cool.

As Kaurismaki matures, so do his characters. It’s almost like they’re growing up with him. Also maturing is the care he has for them. In his early films the characters were more about the performance than the characters themselves. Here, each character is given more attention and realization. Even supporting characters with only a few lines are fully fleshed out. I don’t know what it is about Katie Outinen, but I just love her. I was gratified to hear from our neighbours at the end of the show that they felt the same. Her face is as blank as can be, but you get everything you need to completely understand her. Equal praise to Markku Peltola portrayal of the titular M, Man without a Past. His strong yet vulnerable, stoic yet wry, portrayal of a man between two worlds was pitch perfect.

Mr. Kaurismaki is as bleak as they come. How come then I always walk out reaffirmed about life and grinning from ear to ear.