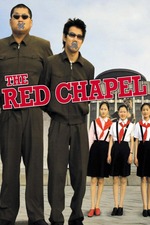 Part of Lise and Jonnie’s March Around the World 2017

As the hours have passed I’ve grown from being awkwardly indifferent to this film to pretty much hating it. I knew going in that two of my bestest LB and TIFF buddies, Len and Rick, loved it based on their ratings, and I was expecting to love it too, based on our shared sense of funny.

I’ve seen a doc on someone who took the North Korean ‘tourist tour’, and an amateur account of the same thing I found on YouTube sometime after. Yes, it appears that North Korea has an entirely fake city, filled with the brightest and best, used simply to showcase to outsiders that they are a nation that stands below no one in culture, talent, and achievement. The strictly guided tour that the previously watched docs tread the same path, saw the same spectacle, drank the same drinks, sung the same karaoke. Both of those filmmakers, just as director Mads Burger in The Red Chapel, postulate that the ‘real’ North Korea is well hidden from view, and nothing like what is being presented.

I like mean humor. Early in our relationship my wife Lise and I knew we were for each other when we read the title of a soon to be opening Second City show … ‘Piñata Full of Bees’. The image of those happy little kids whacking at that piñata, and the bees getting madder and madder made us laugh and laugh and laugh. That’s why I thought Brügger bringing two South Korean born, but raised since birth in Denmark comedians, one who self describes as ‘spastic’, but likely a sufferer of cerebral palsy to perform a ‘vaudeville show’ for the Kim Jong Ill’s comedy club, would be hillarious.

Access is granted by playing the card that these two comedians, of South Korean birth, but European upbringing, want to play North Korea. A classic setup. Their show is so juvenile, including continuous wind-passing and prat falls, that the know the North Korean handlers will want to interfere, especially as they planned their encore to be singing Wonder Wall with a children’s chorus.

Of course the North Koreans think the fart humor is jejune, and that ‘wonderwall’ is provocative. Of course they don’t want a cerebral palsy sufferer to speak on stage, suggesting that the whole play be communicated with the blowing of whistles. This just plays into Brügger’s hand.

What really turned me against the film was how Brügger treated their handler, Mrs. Pak. During a visit to a monument to ‘Glorious Leader’ Kim Jong Ill, Brügger asks Pak how she feels about being here, and she is obviously emotionally overwhelmed. His voiceover comments that this well could be because Ill, and his father, supposedly brutally executed millions for petty crimes or speaking out. Well, this is a pretty smug presupposition. From watching Park Chan Wook’s brilliant JSA, and recently Kim Ki-duk’s equally brilliant The Net, North Korean loyalty can’t be brushed off as either brainwashing, fear, or stupidity. Likewise Mrs. Pak’s demonstration of affection towards ‘spastic’ Jacob Nossel cannot be dismissed out of hand as theatre for the Danish documentary Brügger is mounting.

To make matters worse, Nossel’s ‘breakdown’ towards the end seems to me too storyline perfect. If this is the case, this ‘documentary’ is far far worse than anything Michael Moore has mounted.

Me? I believe this was simply a mean spirited enterprise to embarrass the foot soldiers of North Korea without any understanding of them, their feelings, or their lives to gain a few kudos and laughs. It takes a smug son of a bitch to do that, and I think that’s what Brügger is. A sensationalistic prick that cares less about the issues than his own personal narrative as a 'rebel'

With North Korea now having nuclear capability, and recently demonstrating proficiency in delivery missiles, this is a piñata we mock at our peril.