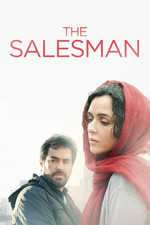 Asghar Farhadi stays with his strength, rendering a story of a couple in crisis, and employing actors he trusts with his vision, the brilliant Shahab Hosseini and Taraneh Alidoosti.

In all of his films he tempers his characters with reasonability, tenderness, and caring, and responsibility; that’s how I think the audience is so easily accepting of them, it’s also why these films are such a great ambassadors to the west .. we get to see that cosmopolitan Iranians are not really that different culturally and in their acts and wants and fears in daily life.

I don’t really want to reveal the key event that sets the arc of the film in motion, as I feel its best revealed by the film itself to its audience, but honor and retribution are key elements. What I found most refreshing is that there was no blood-in-the-eye rage that stereotype would dictate; even western films would likely pile on the melodrama in a similar circumstance, no, there was an even-handed determination that channelled the justice.

Making films in Iran is a difficult endeavour. In the salesman, the central crisis is never even given a name, most likely to stay onside with the government censors, but Farhadi still gets a dig in with a line of dialogue indicating that the play the characters are presenting, Arthur Miller’s Death of a Salesman, needs 4 scenes removed in order to comply with a decree of censors or risk having the show shut down. I guess you can get away with a little bit in Iranian filmmaking without being thrown in jail and banished from making films for 10 years.

I’m glad that this type of portrayal lead The Salesman to break all box office opening records in Iran, and I hope western audiences take notice.