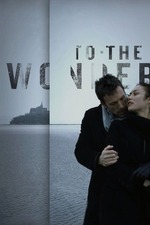 It’s been about a year and a half since I last saw To the Wonder at TIFF. I loved it, or rather, I felt the love. It enveloped me and made me feel warm. It carried me along like a tide. I didn’t see it, I felt it. The vast majority of others didn’t feel this love. Letterboxd was different, compared to the reviews I read back when it was on the festival circuit, the percentage of positive reviews was quite high, but, then again there was a recurring theme in other reviews of ‘overindulgent’, ‘parody of himself’, ‘he’s gone too far’. What I had rationalized is that Malick had experimented, and found a way to bypass the normal way in which we perceive and process a film. He found a way to go straight to the heart. Obviously, it didn’t work for everyone; but those it worked for, it was like a magic spell; powerful and potent.

I bought the blu when it was released primarily because my son wanted to re-watch. He was among the majority in my party at TIFF that didn’t feel the love. I’ve had it for a while now. Weekends and holidays when my son has been up have come and gone, and there has always been a reason why it wasn’t a good time to watch. Maybe that reason was that I was afraid. Afraid the love was a onetime thing that I wouldn’t be able to recapture. This was the weekend of reckoning.

As the film starts, and Neil and Marina ascend the stairs to the Wonder, I’m relieved that I feel that feeling again. It’s hard to describe, other than the feeling you feel when you think you’re in love. Butterflies maybe? Tingly? Warm? Then it hits me like a ton of bricks. These aren’t Neils feelings I’m feeling, they’re Marinas. This changes everything. Malick isn’t remembering, he’s empathizing. The happiness I feel is Marina’s happiness. Now, when the shift is made to Texas, I get a new flood of feelings. Anticipation, fear, wonder. All this gives way to a warm glow of protection, like a pair of warm arms around me. Everything will be all right.

But everything isn’t alright. Neil has doubts. Neil cannot act. Neil is suffocating. Malick is now Father Quntana, asking why God has forsaken him. Why he cannot see him. Why he cannot feel him. But it’s not, Malick I feel, I feel Marina. I feel the fear, the sadness, I feel an empty pit in my stomach, and eventually the anger. I feel despair when he doesn’t ask her to stay when her visa expires.

Neil’s job is testing the soil. It’s unfit. Things can’t be built here. Things that are built here are dying. There’s nothing he can do about it.

Now I feel a fresh emotion. One fragile and damaged; timid. It’s Jane. After a brief flight, a feeling of well being, the emotional crash is an aching pain; like a wound being reopened. I feel it.

Marina returns, but the feeling is weak now; desperate, maybe a final chance. The feeling turns malignant. Wishing, hoping that Malick will do the right thing, cut the cord with finality, but he won’t, and I feel like I’m aching. Malick’s voice returns with Anna. This is his real spirit telling Marina what she should do. Marina does, and much like Christ, feels the pain. Again, I feel it too.

Release. Marina is alone again, but free. I feel relived. I feel tired. Malick is hopeful he can see again. I don’t feel anything for him, other than good for you. Look at what you’ve done. I have a feeling that it’s exactly what he wanted me to feel.

I haven't lost the love. The love has pulled me in further. I’m not ready to declare, but this may now be my favourite Malick film.