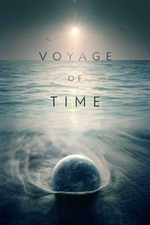 When Lise plans our TIFF schedule (thank you sweetie), there is always the question of the ‘Sunday Movie’. By that final sputter of the festival, we’re pretty much movie’d out, and just want to get back home to see the cats and relax a bit before starting the work grind once again. There’s also the bother of checking out of our hotel / AirBnB and packing up the van. What this usually results in is our skipping our Sunday show. Well, I thought this year it would be brilliant to place one of my most anticipated films in that slot, Malick’s Voyage of Time. A documentary about Life, the Universe, and Everything.

It worked, in a way at least. I didn’t skip; I saw the film.

Those who know me here know that I’m an unapologetic Malick fan; although I believe I hold some shard of credibility of not stepping over the line to fanboyism as I still haven’t come to The New World. All of his early work are films where I appreciated his mastery of interleaving nature, verse, and simple dialogue with synergistic results. With Tree of Life and To the Wonder, he stepped onto the next plane of filmmaking, one that also delivered a message directly to the soul. Those who got it, got it. Alas, those who didn’t found it hard to see anything redeeming in these films. However, some who didn’t feel it the first time, were suddenly taken by surprise on a re-watch. Me, I felt them on first watch, and the intensity of those feelings only grew on subsequent viewings.

I was expecting a lot, yet trying to temper my expectations.

Another reason for my final Sunday choice was that it was playing at The Scotia, and the Scotia has big screen stadium auditoriums, perfect to get lost in the visuals to come. Like all Malick films, I don’t try to interpret on a first viewing, I rather just let the sights and sounds and questions wash over me.

It was gorgeous. Then again, I expected nothing less.

But it was a story I had seen before in To the Wonder, but only missing the potent and poignant connective story that gave the questions and visuals meaning. In short, there was nothing new, and without something to ground it, the film became even less from a spiritual perspective.

Malick can deliver the heart of nature expressed visually; the locusts, the tumultuous winds, and the fire as its expression of nature crying out in sympathy in Days of Heaven, as an example, but I found this outing surprisingly cold, and surprisingly visually literal. The spiritual questions seemed forced and out of place; there was nothing cohesive that danced with the visuals, and the visuals lacked the soul to support the spirituality of the verse.

Douglas Trumbull was missing from the credits.

A number of years ago, just before Tree of Life was going to be released, I attended a talk by Douglas Trumbull, one of the great Special Effects Supervisors of 2001 : A Space Odyssey, on his participation in the film. During the Q&A someone asked if he thought there had ever been, or would ever be, a film like 2001, and he answered, ‘The Tree of Life’, and then recounted how he and Malick had been working together on particular sequences. When the awe inspiring film came out, I was disappointed that he was only given a minor consulting credit. By that time, Voyage of Time was announced, and Trumbull was credited as Visual Effects Supervisor. Well, when the credits rolled in my screening, I was confused by his total absence. A quick google brought up an article about the delays in Voyages , and how Trumbull now said he was never really involved. Further reading showed that Malick was sued by his primary backers for forgetting to make Voyages of Time.

Then, thinking on how there are two versions of the film; this feature, and a 45 minute IMAX cut, and how IMAX was also a major sponsor made my heart sank a bit. The usually spare, but suddenly prolific auteur may well have HAD to make Voyages of Time, and its companion IMAX short ( that undoubtedly IMAX will use in its attraction theatres ) on a specific deadline; giving up his usual, but suddenly unusual, months and years of agonizing over it. The film wasn’t the worse because Douglas Trumbull wasn’t involved, but rather his lack of involvement indicated to me that Malick had given up on his dream, and that made me sad.

Did I expect that Malick would ascend the documentary form to a new plain the way Dziga Vertov did in 1929 with his masterpiece Man with a Movie Camera .. yes. Did he? For me, at least, no.

Do I think he still can? Absolutely.