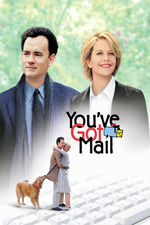 This is the second time now that Lise and I watched this one after watching Shop Around the Corner. Honestly, I didn’t remember it much.

As far as prejudices, let me start out by saying that I’ve always loved Meg Ryan, and her first collaboration with Tom Hanks, Joe vs. the Volcano, is probably one of my favourite films. I’m a big Harry Met Sally fan, too.

I simply think Norah Ephron took a bite bigger than she could chew, but, saying that, delivered enough great scenes and moments that you’re, at points, hopelessly hooked in.

Shop Around the Corner it’s not, it sqandars the Christmas vibe, but the depiction of the tech from ‘97 is not as horrible as you might … beezzz buzzzz schrreeeeeeech, deeeeh dah deeh dah shhhhh …. Think.

Kudos to Epheron for exploring the much more difficult to evince communication-by-mail aspect of The Shop Around the Corner. This tact depends heavily on the facial expression skills of Hanks and Ryan, and often it gets pretty tiresome sometimes, though.

One of the best points that Ephrom brings home is the the non-romanticized reality that Big Business kills Small Business every time. I'm just not so sure that Ryan's character would accept it so easily. I think that could happen, but there would have had to be a cathartic scene between either her and Hanks or her and Stapleton, of which there really wasn't. Stapleton's character merely offered something about being happy and twirling.