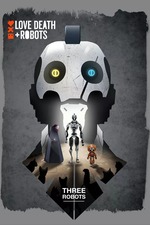 Even though this was marketed as a series it does feel like one big animated anthology movie similar to films like “Heavy Metal,” “The Animatrix,” “Robot Carnival,” “Neo Tokyo” etc. Overall, I liked this. It was enjoyable with a few standout pieces, and I’m looking forward to the next iteration. It briefly brought me back to the mindset I had in my teens when I thought anime was the peak of cool, cutting-edge entertainment. I’ll just briefly review every segment here, as I don’t want to clutter up my feed by doing each one separately.

The entry short. It’s about three robots taking a vacation in a post-apocalyptic earth completely devoid of humans. There’s a couple of genuinely funny moments but overall I think this it was just an average piece. All of the humor pretty much consists of the robots dissecting the alien objects and odd traditions that human beings once interacted with or engaged in and getting it wrong in some way.

This was my favorite out of the entire series. It’s not just because this had one of the best depictions of Cosmic Horror I’ve seen, but also because the story fit perfectly within the limited confines it had to tell it: i.e., it worked perfectly as a short, and elongating this into something longer would’ve simply lessened its impact. It’s about a trio of crew members on a spaceship that wake up from suspended animation after going through a warp gate that’s able to bridge light years of distance. Due to a routing error they find themselves incomprehensibly further out than where they intended. That’s only the beginning of their problems however, as the very fabric of reality around them soon comes into question.

It’s a familiar conceit seen in several other sci-fi works like “Event Horizon,” “Star Trek,” and even “The Matrix” series to some extent. The way it’s executed here however is so chillingly effective; it’s truly disturbing on a fundamental, existential level. To me, the best depiction of Cosmic Horror is where the very thought of what's occuring is so disturbing or overwhelming that the mind can not, or will not choose to accept it. I think this short alone made this series worth watching, and was placed well as the second entry in order to compel you further into wanting to watch more like it.

This was a great self-contained entry. You can easily see this as one of those Pixar shorts shown before their main films. It’s about a couple who discover a miniature, intelligent colony living in their freezer, that seems to technologically progress on a much faster time-scale than our own. It’s similar in tone to the Futurama episode “Godfellas” where Bender becomes home to a sentient bacterial colony living on him. Overall, I thought it was one of the better entries.

This is one of the few shorts that I wish was expanded into something larger--and had the requisite core narrative material to do so. It takes place in the future where fearsome engineered creatures (guided mentally by human controllers) fight to the death in arenas as entertainment. The animation style was beautiful, and the story and character development was intriguing considering the time constraints it had to concisely depict everything. Probably my second favorite short in the series.

This feels like it could’ve worked better as a premise for a video game. It uses a realistic animation style, and is about a Soviet army that hunts down demonic creatures in the remote Siberian tundra. It’s primarily action-based, and does nothing new that you haven’t seen before many times, in multiple different mediums.

An unusual one. The animation style contrasted sharply with the subject matter—but deliberately so. It has a cutesy style, but the story suddenly diverges into a violent, gruesome one. It’s about an archaeological team that stumbles upon the tomb of Dracula (who’s depicted more as a mindless, feral beast). It’s entertaining, but I felt the jarring quality that it was probably going for didn’t quite work as well as intended. Middle of the pack entry.

I absolutely loved the animation style. It had a very stylized look. The vibe this gave off made this feel like it could’ve fit in perfectly in “The Animatrix.” It was one of the most overtly sexual, and neatly constructed though predictable. The conclusion just didn’t feel shocking or compelling compared to what it seemed to be building to.

One of the better ones. This also felt like it had a premise that could be sufficiently expanded into something larger. It’s about a group of farmers who are periodically attacked by strange creatures. They each pilot a unique mech suit they use to repel the monster's continual attacks. This is mostly action-based, and the idea behind it is a fundamentally interesting one.

This had an intriguing premise, but I just didn’t think it was executed all that well. The animation style resembled the one used in “The Legend of Korra” series. It was about a father/son hunter duo who traps a shapeshifting fox in the guise of a human. The story then takes a drastic turn into a steampunk inspired world, telling a familiar theme on how technology is driving out the old ways of magic and the supernatural. This gets points for being original, however it felt too split in what it was trying to achieve.

When the Yogurt Took Over

Short, humorous piece that riffs on a ridiculous premise: what happens when a super-intelligent yogurt takes over the entire world? This was short and sweet, and didn't overstay its welcome.

Probably my least favorite entry, as it didn’t present anything interesting regarding the story, visual look, or structure. It’s about an inspector who visits a man living at a junkyard dump that has an unusual secret to tell. Pretty forgettable overall.

This is yet another piece I can imagine being expanded into something larger—although it would most likely be turned into a mediocre Hollywood action film. It’s done in a hyper-realistic animation style and depicts a pair of werewolves serving as US marines in a foreign country. Although heavily discriminated against, their superior senses prove to be invaluable in sniffing out enemy locations. It’s a simple premise but was executed very well, to the extent that I wished there was more of this to tell.

Poetic, dreamy piece about two salesman stuck in a desert that used to be an ancient sea millions of years ago. They discuss the possibility of spirits coming back and haunting certain houses, and if the same thing can apply to the myriad of sea creatures that once inhabited the then aquatic environment surrounding them. This is a wonderful piece with a graceful sense of awe.

A solid entry. It reminded me of “Gravity,” especially in the spine-tingling space walking scenes where a single missed ledge grab is the difference between staying alive or drifting endlessly into empty space. The enjoyment is mostly contained in the immediate depiction of an astronaut fighting for her life, with a shocking twist to boot.

This had the most unique form, as it resembled a futuristic database query akin to Google except with the added ability to depict alternate histories and probabilities. That’s the gist of the story as it portrays different historical outcomes that would arise if Hitler was assassinated in a number of varying ways. It was brief with a cute animation style and a good change of pace from a lot of the other shorts.

Another quality piece. This was about a rookie pilot embroiled in a future war on an alien planet. She’s assigned to a supposed unlucky ship #13, but then soon after survives one dangerous encounter after another. Trouble arises in her most recent mission, as she struggles with not only keeping her crew alive, but also the ship itself that she’s formed a deep attachment to. It was done in a realistic animation style, and was successful due to its top notch execution from beginning to end.

This had an anime-esque animation style. It’s about a group of cyborg thiefs that attempt to steal a valuable item from a heavily guarded convoy. This stood out a bit, simply because it went in a different direction than most of the entries here. It also greatly reminded me of the famous short “Codehunters” (seen here) that was an inspiration for the “Borderlands” video game series. This was also executed well even though it didn’t really present anything we haven’t seen before in more conventional heist films.

This was probably my third favorite short. It had a fitting stylized animation style, and was the most poetically beautiful alongside “Fish Night.” It’s about a famous artist in the future whose works grow larger and larger in scale, but intriguingly contain a small space of blue that also also begins to grow larger and larger until culminating into artworks made up entirely of blue space. This has a beautiful denouement that resembles a Zen-like journey of stripping oneself down into the barest elements until finally being able to confront a transcendent truth.