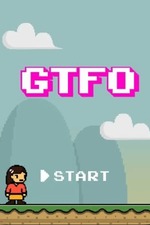 GTFO is a movie that everyone in the gaming community should see. Shannon Sun-Higginson's film, which was funded on Kickstarter, is an excellent look at the problem of sexism in the video game industry on several levels. This is an activist documentary and it presents its arguments with a definite goal in mind, which is one that it tackles quite effectively. The abuse that some of the interviewees in the film have suffered is unconscionable and whether you agree with their individual points or not on one issue or another, it is impossible to deny that there is a problem when you see what they've been through.

If there are problems with the film, they are understandable ones. Critics may point out that Sun-Higginson doesn't offer a balanced perspective, but in truth it would be difficult to defend much of the things that the film touches on and frankly that's not the point anyway. An activist film that presents one side of an issue is fine when the film is clearly positioned as such, and this is that case. The other potential complaint would be the video and audio quality of some interviews, which appear to have been done remotely via the internet (likely for budgetary reasons). Ultimately GTFO is a great look at a topic that could use a wider light shined on it and is well worth seeing.