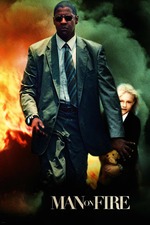 A seriously stunning work that embodies the “ends justify the means” of the Bush era (or tbh every US president) vision of justice. I saw another review on here that says this doesn’t feel like it was made to be intentionally subversive, but just captures the violence committed in the name of justice here so brutally and disturbingly that it feeling nothing but subversive now. Like John Wayne’s Ethan Edwards, we see Denzel embody a hero who’s path of “righteousness” leads him to a place that isn’t righteous at all. It’s telling that Denzel is constantly holding his Bible but emblematic of American Evangelicalism the only truths he proclaims are things like “the bullet always tells the truth” or “forgiveness is between them and God. I’m here to arrange the meeting”

Also like The Searchers, this captures the seduction and decay of American Imperialism better than most films I’ve seen.

On a formal level too this is easily one of Scott’s best. It’s pretty incredible too that the depiction of Mexico as a location from most US film and tv in the 00’s I associate as being a “Tony Scott” look is subverted here into such a specific vision of Mexico City that it often very beautiful. The editing here too is is as on fire as the man in title is, every shot is cut to perfection.