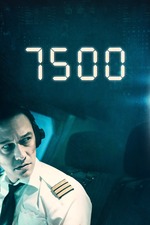 7500 is a pretty well paced film that looks slick, it's worth a watch if you like this sort of thing. The thing about hijacking movies though is that until the hijack starts you mostly just sit there thinking "I wonder when the hijack is going to start." This is no different, the beginning is a masterclass in how to start a film boring. Once the hijacking does start it is a gritty attempt at a realistic hostage situation film with intense moments and an above average performance by JGL. The tropes are there but this has new wrinkles that are interesting and suspenseful.

P.S. One of the biggest disappointments I have in this film is the lazy use of Muslim terrorists. This is an original story so it just feels like passively racist shorthand.