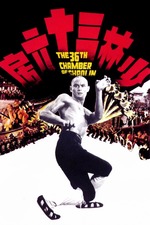 Did this movie invent cross-fit? BTW, when are these bad guys going to realize that they need to stop fucking around with people's martial arts schools?

In The 36th Chamber of Shaolin a man's teacher and associates in his martial arts school are all killed. Lu Yu-De escapes the ambush and makes his way to a shaolin temple where he must master 35 different forms of training to become a Shaolin warrior monk. Now that Yu-De is stacked and packs a punch it's time to revengineer and awesome final act. I like this movie so much I had to pause it twice because I was overwhelmed by its awesomeness.

I really enjoy movies that take an incredibly simple plot and add a complex latticework of fun exposition on top. 36th Chamber's basic plot is (1) Bad man hurts good man's friends (2) Good man trains (3) Good man fights bad man, but the innovation and creativity of the 36 chambers are great. This film is the ultimate in wish fulfillment because it's fun to see Yu-De become Monk San-Ta and pass the varying chambers. One chamber for example builds arm strength by having people carry water in such a way that if the water falls the person will stab themselves in the sides. They are all fun but then by the end you are the ultimate badass. I said wish-fulfillment earlier because I really appreciate the fantasy of being so tough that you can effortlessly beat up dozens of men at a time. It's a fantasy that won't go away any time soon which is part of the reason this film remains so popular.

I would also say that the fight choreography in this film is stellar and some of the most interesting I have seen put in film. I love seeing full speed weapons battles and this film has many of those, along with a strong story arc. Definite first film to watch in the genre. I'll like write a more analytical review because this movie is great but I may need 35 more watches to make sure of that.

P.S. Thanks to Waqar for the suggestion. He's a great follow everyone:
letterboxd.com/kiyxni/