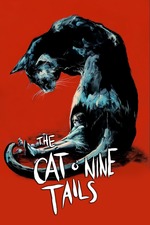 Oh... so that's what it looks like when someone is run over by a train. That shaving scene crazy.

A newspaper man, a blind retired journalist, and a little girl walk into a murder plot that involves genetic research companies and Argento ensues. There is a lot of good genetic babbling garbage in here like the XYY chromosomes predicting violence among people and other garbage.

The ratings of argento films, for me at least, rely heavily on (1) use of color (2) gore (3) score and (4) approachability/watchability. This isn't Suspiria or some of his other color porn films but I like the use of contrast here along with the bizarre color palette that always makes me feel like I am in a slightly different part of the multiverse than others. The score is above average but just fine for an Argento film. I like Morricone's work generally but I was looking for something a bit more hard hitting and intense like the Goblin tracks on his later work. This movie is incredibly watchable however, in that every 2-3 minutes the journalist is interacting with something or someone weird.

One thing I specifically need to highlight is the sex scene that takes place about halfway through this movie. First of all, do dresses like that really exist? This is a dress with velcro'd straps so that you can tear off like tear-away pants in the NBA. If they do exist what are they called? Fuck dresses. In addition, who the fuck follows up sex with tall matching glasses of celebratory sex milk?

Yeah, it's pretty good but I would have liked more gore.

The Thing from Another World