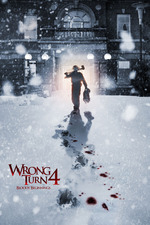 Six women that look fantastic in sweaters and a few guys with abs who curse and yell find themselves in an abandoned mental institution populated by homicidal inbred cannibal hillbillies. Yep, it's because they took a wrong turn.

There are legitimately frightening points in this film and some suspense is built. Overall, this is still very okay but I would give only a mild recommendation to horror fans.

I give this film an extra half star because (1) the very end of this film is hysterical and (2) being chased in the middle of the night by mutant cannibal hillbillies on snow-mobiles is absolutely terrifying to me!