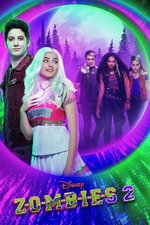 "Cheer can be so much more" - Addison,
AND
"I thought everything would make sense if I was a werewolf, but I'm not, and I don't even know if I'm a cheerleader" - Addison,

These movies are insanity.

We are back for another zombie civil rights themed romantic dramedy musical for children and everyone wants to know what a middle aged man thinks of it.... well you're in luck. The first film was about zombies achieving traditional zombie goals while this film is more about reconceptualizing mainstream zombie identity. It's really a post-movements film for the zombie contingency. A lot bout the meaning of status, assimilation vs. pluralism, and discussions of what truly being accepted in a society means.

Now we have werewolves and much like when the feminist movement had a reckoning and learned to bring lesbians and women of color into the fold, zombies and humans must learn a broader and more progressive conception of "monster" rights that treats a larger swath of the community with the dignity they deserve. Also there is a plot involving a magical moon stone or something. The music is still ridiculous and the tone is still wrong in all the right ways but damn are they trying here.

I loved it and you should absolutely not watch it.