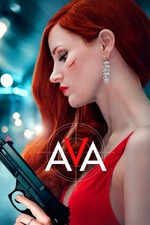 The sort of film I'd want to like for digging the genre but is a mismatch of what story and genre. It feels like a battle between plot and subplot. Unable to decide which should be taking precedence. Eventually, the subplot takes the higher ground and well, the results are evident,

It delivers on genre tropes of action albeit with some clearly evident stunt doubles that were reminiscent of watching old Buffy episodes, but that notwithstanding, it's hardly the main issue.

What it's about is alcohol addiction and regrets with the family for fleeing without a goodbye when things got bad, which is stated more than it is shown. She atones for it, that too somewhat reluctantly because the main plot gets in the way.

The worst of it is what it eventually is saying. Reading between the lines here, but caving in to her addiction is what finally gives her the strength to do what needs to be done. Awkward.

I came into this expecting a bad film from the ratings, more for seeing the mistakes others can make that could've avoided at a script level. For that learning, I'll give it an extra ½ star.

This is not so much a terrible film, as it is a tug of war between two stories that came out worse for both sides because the rope snapped. It's not a good film either, but I wouldn't knock the performances.

All in all, I'd only recommend it for educational purposes.